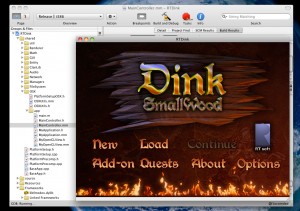 Yep, you can now compile a native OS X app of your p+ project!

This is a feature I’ve been wanting for a while because I:

It looked a bit too hacky to try to support OS X and iOS builds in the same xCode project so I did them separately – but because you can drag and drop project items between them it’s very quick to setup.

I’ve added OS X xCode projects in  the OSX subdir of RTSimpleApp and RTBareBones on svn.