Originally $19.95, our old game Teenage Lawnmower (originally released in 2002) is now a free download.  It requires Windows XP or newer to play. Tested fine on Windows 10.

For posterity the source code/etc is now on github.  Anybody is free to steal its 3D engine, its C style scripting engine, or try to port the game to something else.

Warning & disclaimer: It’s 15 years old, I don’t recommend learning from or re-using this code. I mean, it’s better than Dink Smallwood’s code, but I wouldn’t call it elegant or anything.

Now, while I’m here, I thought it would be fun to talk about the experience Akiko and I had of developing it, how many copies it sold, stuff like that.  For reference, I’ve kept the original TLM website frozen in time here.

“Get ready to smoke some weeds” the website says

My dream was to write a 3D RPG.

In those days, that meant writing your own 3D engine – there was nothing off the shelf you could start with like there is today that would have the power I’d need.

Having been through the gauntlet of completing something as massive as a role playing game previously (Dink Smallwood) and barely surviving, I knew that the key would be to develop the engine using smaller sub-goals.

Teenage Lawnmower (TLM) was a game design that didn’t require a single human 3D model and was very flexible for how many assets/levels we wanted to create.  It could test our 3D engine features like scripting, terrain, and weather, and could even be sold for some extra bucks. (in theory…) 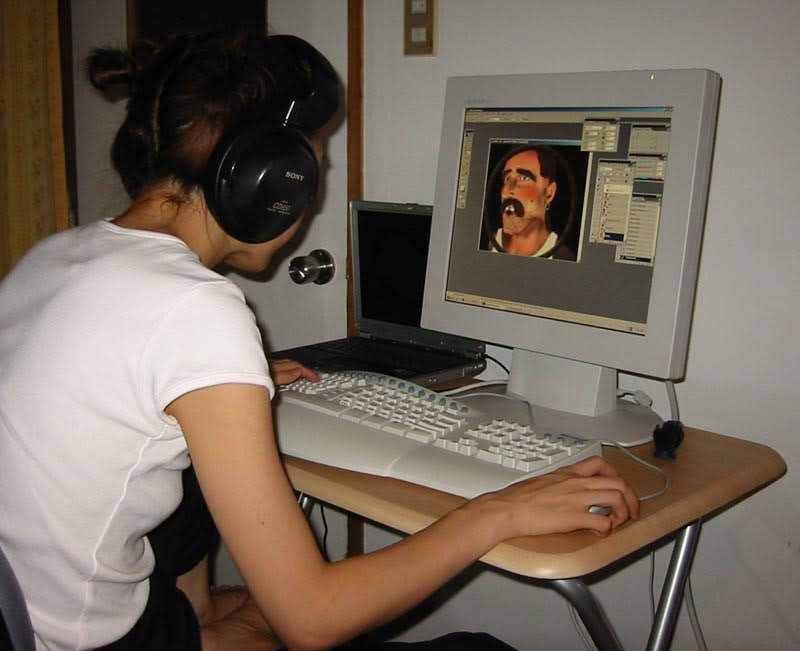 Akiko uses Poser to create a redneck for Teenage Lawnmower.  Poser was kind of the Unity asset store of the day.  (photo by Seth Robinson, 2002)

TLM was the stepping stone to something greater.  Spoiler alert, looking back, it was the only game I sold that was completed using my 3D engine, the RPG never happened.

So without this “stepping stone” I probably would have nothing at all to show for all that work on the engine.

Working for years on engines and ending up finishing nothing is very common in my circles, big games are <font size=1,000,000,000>REALLY</font> hard to finish.

How long did it take to write?

It took around four months from start to finish.

I’d already been working on the 3D engine for a while before we started TLM though, if I included that, it would be much longer.

Ordering via RegNow (and later Paypal) would automatically generate and send a custom text key to the buyer within a minute. (sort of like a Steamkey)

I went overboard with the DRM.  I think I was overlay concerned about this because previously Legend Of The Red Dragon was pirated at a huge scale and our RPG Dink Smallwood had hit the warez sites the same day as its release.  It hurts to know someone who pre-ordered the game probably only did so to pirate and share it.

TLM was never pirated as far as I know.

I later used this same anti-piracy system for Toolfish and Dungeon Scroll.  After a few years, I removed the DRM from all of my software.  Did I ever really need it?

I still have all the sales data so here it is. We started selling it using a payment processor called RegNow.  The first sale happened on August 28th, 2002.

So that breaks down to $1600 a month (ignoring support and just looking at the four months of development) for two people.

How could we survive on only that revenue?  Well, we didn’t…

A friend clued me into the IGF and told me I should enter TLM. (Thanks Geoff Howland!)  The IGF entry deadline pushed me to finish the game quicker, I sent off the entry submission CDs the day after the game was done.  (yeah, in those days you had to send 10 CDs)

We were energized by being chosen as a finalist, despite the $2000+ cost for the two of us to attend the conference from Japan.  I mean really, that ate up a third of our earnings from the game!

I didn’t learn though, I went back in 2003 when Dungeon Scroll was a finalist as well.  We joked that we just couldn’t afford to enter the damn IGF anymore. 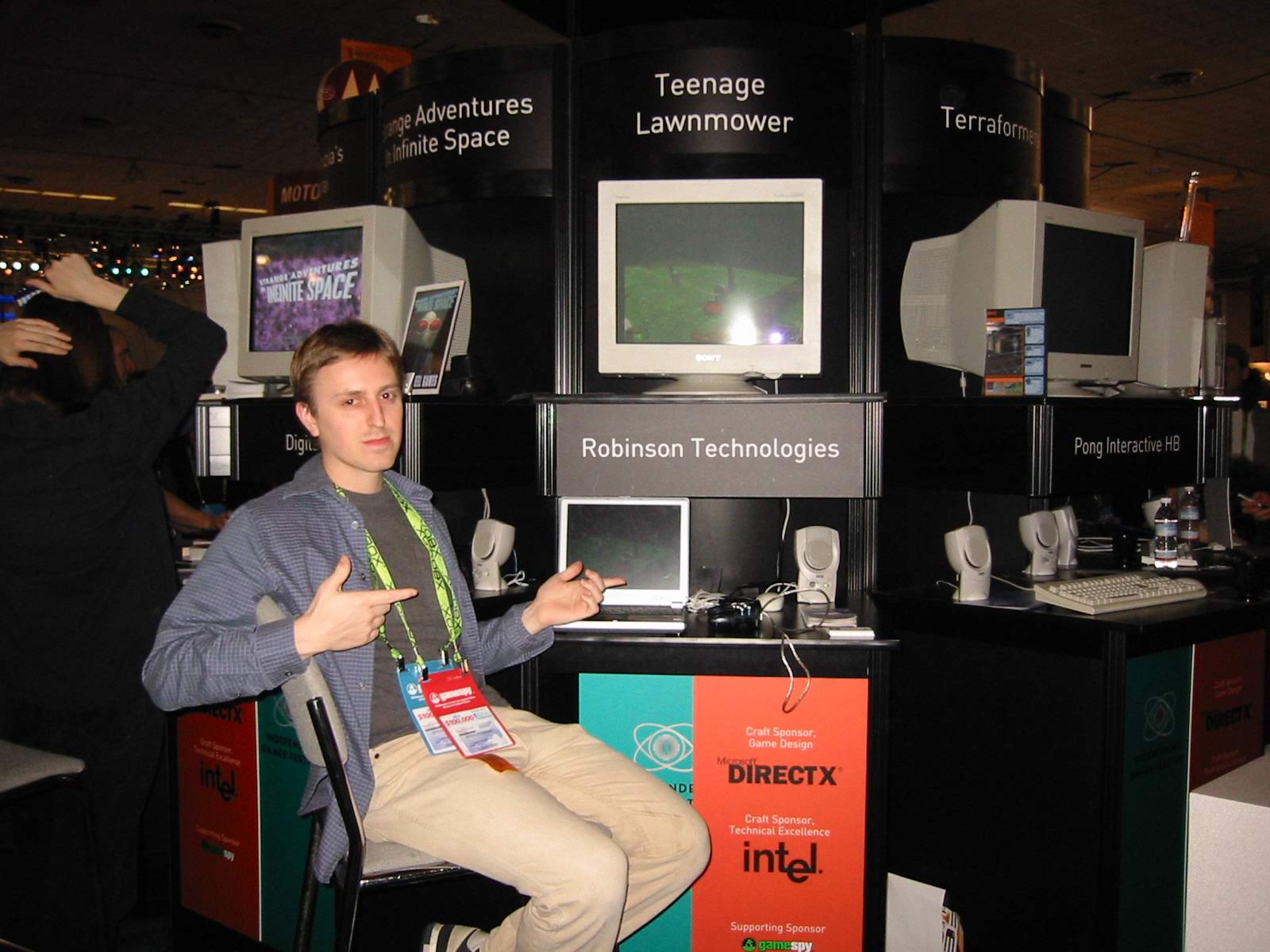 A frazzled Seth shows off his game at the IGF (photo by Akiko, 2003)

My cheapo laptop could only run the game at 20 FPS or so.  Hosting a booth takes a lot of energy, the ability to talk up your game, and an outgoing personality.  Yeah, I’m zero for three.  I’ll be happy to never run a booth again!

Akiko sits at the finalist table during the awards show. She’s 5 months pregnant with Cosmo. (photo by Seth Robinson, 2003)

Was it worth spending that much to go even though we didn’t win jack? I don’t know, it was a good experience or whatever.  It was my first time to the Game Developers Conference.

Being a finalist didn’t seem to generate many sales or website hits, not enough to notice anyway.  It did score me a few interviews; I found this one with Gamedev.net.

Hard to see in this pic, but those are beagles down there!

The beagle was modeled and textured from our real-life Beagle, dekochan.  It’s really his bark sound effects in there too. 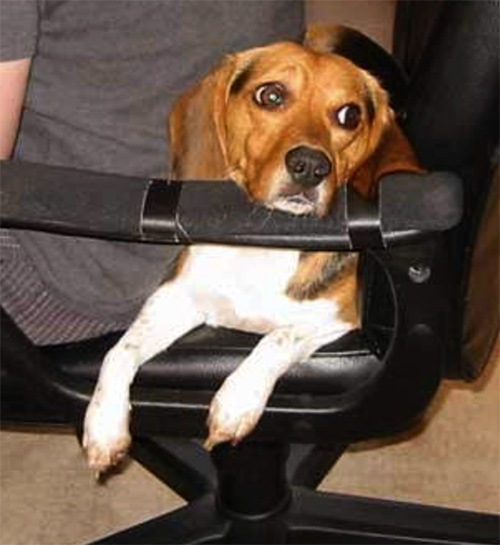 He passed away earlier this year (2018), but I’m glad he got to be immortalized in this and other RTsoft games first. (Photo by Akiko)

Dekochan’s 3D model also made an appearance in our iOS game Tanked.

The connection to Tarzan 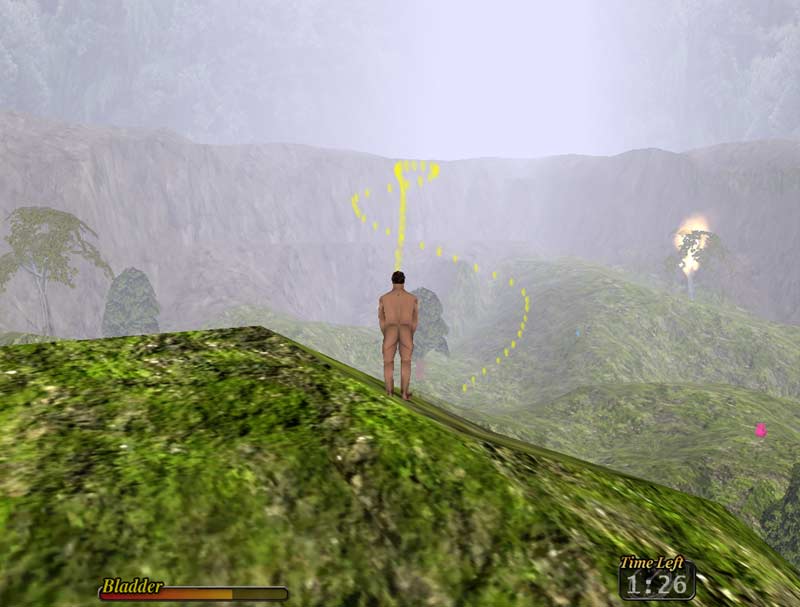 How would Tarzan put out forest fires? Actually the less said about this game the better

So what about this incredible RPG engine that was sure to be an investment in RTsoft’s future? Well, before TLM we did use it in another “stepping stone project”: a game called Tarzan: Guardian Of Earth for a gamedev.net contest.

Lightning that can set trees on fire and some other effects were re-used in TLM.

Tarzan won first place in the contest, which is why I politely shame the gamedev guys to cough up the prize for it in the interview I linked earlier. I was kind of bummed with the delay because I really could have used that graphics card.

They ended up buying the prize at a Toys R Us and giving it to me in person at the IGF event, nearly a year after I’d won it.  Unfortunately, graphics cards tend to age quickly…  (No, I’m not bitter at all, why do you ask?)

The mowing itself isn’t quite as fun or interesting as it needed to be to not feel a bit grindy and boring after a while.  The mowing mechanic is kind of like Splatoon, you need to cover the ground (mowing is a little like painting) and there is a bomb thing that can mow a large area.

The  idea is that every lawn has a unique theme that is tied to story surrounding the customer.  Sometimes that story is even tied to the main story, like when your mom dates one of your freakier customers who live in the woods with dogs.

In the movie at the top of this article, you see a bunch of lemonade pitchers on the lawn.  The owner is an older woman trying to seduce you, she’s drugged the lemonade.  If you touch one with your mower, your controls get reversed, making it much harder.  If you touch three, well, you pass out and unspeakable things happen.

The second part of the video is mowing a guy’s lawn who has a mole problem.  If you kill a mole, that’s bad, but if you hit an empty hole, it gets removed and generates bonus dollars.

Later levels are more liberal with power up placements

A cemetery has skeletons reaching up through the dirt, a rich guy has money randomly spawning around his mansion, a golf course has ducks (yup, the one from Dink Smallwood) and a lady with only a tiny grass patch in the city presents a moral quandary concerning stealing from her wallet. 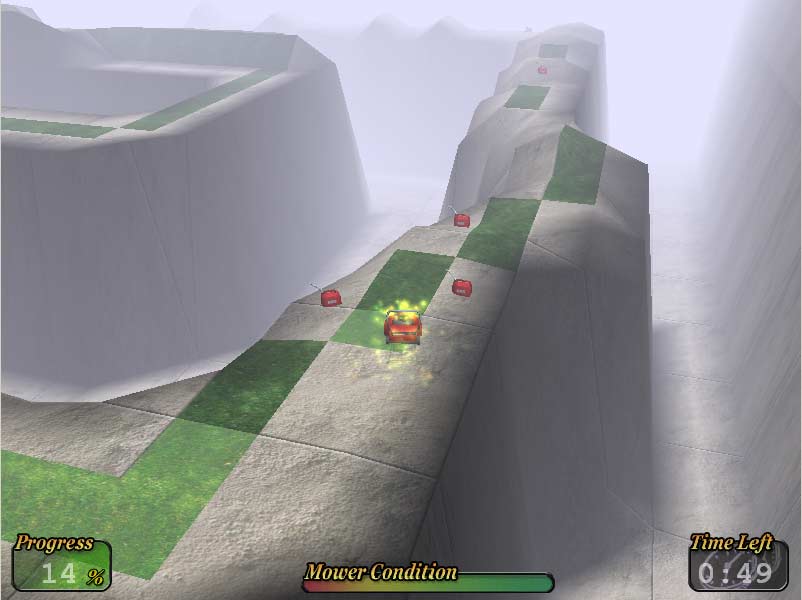 One of the crazier lawns in the game

The metagame to tie together the arcade sequences is earning money to meet various demands at home, which is the “story” portion.  The scripting system made it easy to quickly write and test dialog.  The story deals with topics like alcoholism and domestic abuse.

I was trying to get the player to care about what happens and push through to the next story dialog.  Choices you make can matter, for instance, your stepdad Todd will treat you differently depending on if you took his steak from the fridge or not the day before.

On day thirty you’re treated to one of three story endings based on which difficulty level you’re playing.

A note on scripting

I’ve un-protected the scripting files for this public release, so if you navigate to the script or scriptg directory, you can see how a game like this is setup and uses 99% scripts that can be edited on the fly.

Look at a few and make changes, you could make your own story or cheat!  The directory script/event holds the story for each morning/night, and script/levels holds the level logic for each lawn.

.pss files are particle systems I think, .wet is weather, I think .zon is the level and its terrain, and .obj describes the objects in the level.  Maybe.  The .X files are the models. Remember .x files?!  .dds files are textures. 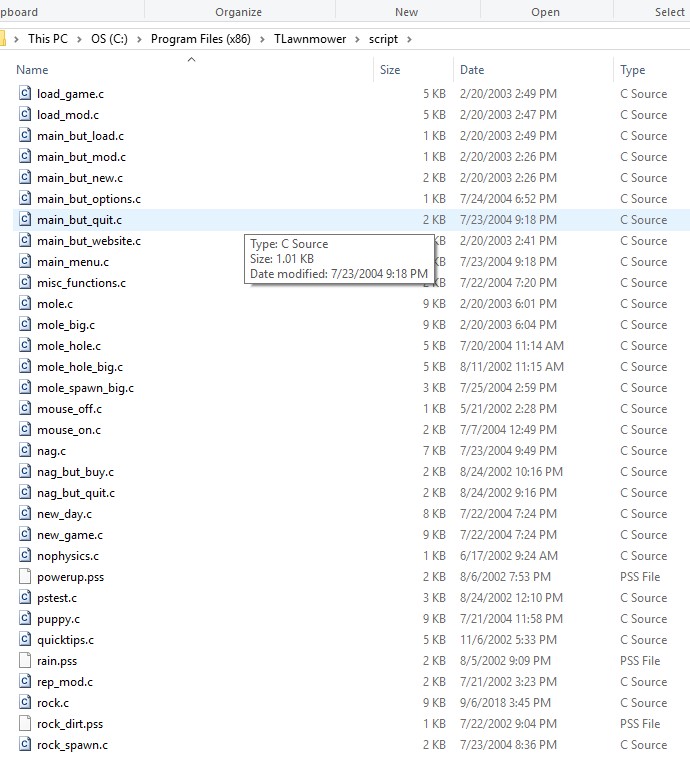