In a hurry? Download link for the program is here.  Edit config_template.txt for directions on setup, it’s kind of tricky.  Only runs on Windows right now.  (Github source) 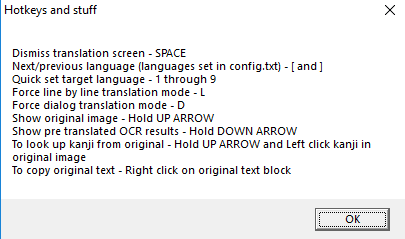 * FEATURE: Added draggable window option (Changed hotkey to Ctrl-F10 in the default config.txt, if upgrading, it will be be Shift-Ctrl-F11 though)
* Removed an include for wiringpi (it isn’t used)
* Added “FMOD Release” MSVC configuration profile, this enables FMOD as well, it will be the default now as I noticed some clicks/pops from Audiere sometimes when playing text to speech generated by Google
* Added status at the bottom that shows what is happening with uploading/download, in situations where “nothing is happening” these status updates will let you know what it’s doing, useful for slow internet or whatever
* Can now cancel spoken audio by clicking it again
* Added a font so rendering Hindi is supported (hotkey is 0)
* Initiating a translation when a translate dialog is already on the screen now just toggles it off instead of doing weird things
* Added “audio_device” option to config.txt, if text matches an audio device that will be used instead of the default
* Joystick deadzone increased from 0.15 to 0.20, needed because my 360 sticks are just bad
* BUGFIX: Word wrap doesn’t sometimes cause spaces to be missing between words

* Added support for rendering Punjabi (note: the only open source font I could find doesn’t have English letters in it..hope to find something better later)
* Added support for setting a source language hint in the config.txt. Required to read some non latin languages, for example setting to “pa” for Punjabi allows that language to be read. Hint language
is shown on startup screen, “auto” means no hint
* Now shows exact google error text onscreen (like bad API key or whatever) instead of saying “open error.txt” (error.txt is still written also though)
* Shows “<language code> language not supported for audio” if Google can’t do text to speech on it (Punjabi for example)
* Punjabi as a translation target is now one of the included languages you can cycle through using [ and ] or L and R on a control pad. Note: these languages can be changed/added via the config.txt, the first one set will be the default on startup
* “Press space to continue or ? for help – rtsoft.com” changed to “<Space or ?>” and doesn’t show at all for extremely small drag rects, so it doesn’t overlay the translation
* Shows “Nothing found” if there is zero text to translate, better than looking like it crashed or something

* Added support for a gamepad based hotkey, (by default you need to push in to click the right joystick) to initiate a scan/translate.  This works in computer mode.  By default it will scan the active window, but if you’ve done a custom drag rect size previously, it will use that size instead.  (useful for grabbing just the dialog area of a game)

Note:  This is useful because you can use just a controller to translate an Elgato game capture or twitch string of a real console, so you can sort of play via two controllers.

* Now using XInput for input which allows UGM to access the gamepad even if it’s being used by a game.  (with a PC game/emulator you can play and do translations without touching the keyboard using a single controller!)

BTW, it’s doing some weird things under the hood to make the overlay work, if you have any problems setup the game/app in a windowed mode and it should be ok.

Note:  You can change which button does the translation by changing the gamepad_button_to_scan_active_window setting in the config.txt.  The options are listed right above where it is. (default is “right joystick button”)

* Gamepad hotkey that initiates a translation now also can dismiss it (by default, right stick button)
* New feature: Pressing E will export the current translation to html and open it with your default browser.  Example:

* Tiny quality of life change for people using the keyboard to initiate translations: The capture active window hotkey (Ctrl-F12 is default) now works like the gamepad button capture, if a custom screen capture area was set previously (Ctrl-F10) it will default to using that instead of the entire active window.

Sidenote:  I know this page is just a giant mess now, sorry!

– NOTE FOR UPGRADING: It’s recommended to start with the config_template.txt again, just copy over your google API key and rename it config.txt again.

Get an error about DXINPUT_1.dll missing?  Please install The Microsoft DirectX® End-User Runtime