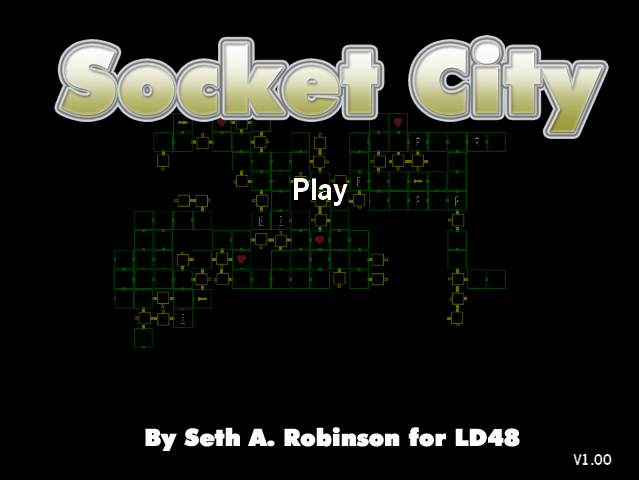 Click here to play the web version now.  (updated to work on touch mobile like iOS browsers as well)

Socket City – a game I made last weekend

So Ludum Dare 24 has come to a close, it looks like 1405 games were made over the weekend, a new record. (Barely!)

In LD23 (the one before this one), I  had used Flash+Flashpunk to create a little platformer.  I never really felt comfortable, and as a result did not dig deep into the real “programmy” end of it, so instead focused on creating the most creepy boss in the history of games.

But this LD the flash target of Proton is now functional (that’s the true reason I did flash last time, to learn enough to write the Flash target!) so I got to use good ol’ C++ and still have a web-playable version.  So less creepy, more game design.

The theme was “evolution”.  My idea was what if you were presented with three alternate versions of a space town each day, and had to choose which one to use, essentially “evolving it” by choices rather than getting to build it.  Each town piece has little “sockets”, new town pieces can only “grow” off of those. 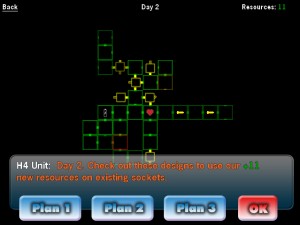 To turn it into a real  game, I added asteroid attacks between rounds, the concept of resources, life, and turret gun pieces that add an action element.

After I built it along far enough play, I discovered…

Only getting to choose between three plans was too limiting.  To combat this, I allowed the player to “rotate” new pieces at will, so he could at least point guns the way he wants, and point sockets at the places he’d like to grow.  Other ideas might have been having more plans to work with, or generating 3 new plans at some cost (1 resource?) and such.

Originally I was only going to grow the base on  the bottom of the screen and have all rocks falling down, but later decided to put it in the center of the screen and grow  “in all directions”.   Not sure if that was the right choice or not.

Good experiment.  If I wanted to fix this up and take it to the next level, this is probably what I’d do:

Anyway, as always, LD was a good experience.  Special thanks to Akiko for watching the kids all weekend and making this possible! Oh, and for making this: 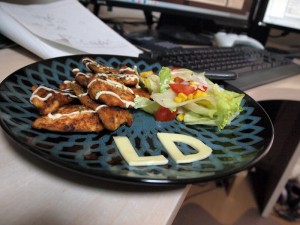