Many moons ago I made a door game scripting engine that read “ref files” (short for reference, I think) to control  what the users see.  Later, this reference file system was used as the base for LORD 2: New World.

Someone asked me today for the source and as I don’t think there are any legal entanglements with releasing this, here ya go.  (About the LORD/TEOS/LORD2 source, I’ve been trying to buy back the rights forever so I can legally release them too)

Note:  Does anybody perchance have the RTReader door game .zip file I distributed back in the day?  I think it was a weird kind of “RTsoft company update and virtual interview with Seth” thing,.

Update:  Here is the RTReader thing I was talking about (Thanks Jay).  I’ve packaged it with DosBox, just click play.bat and it will run. 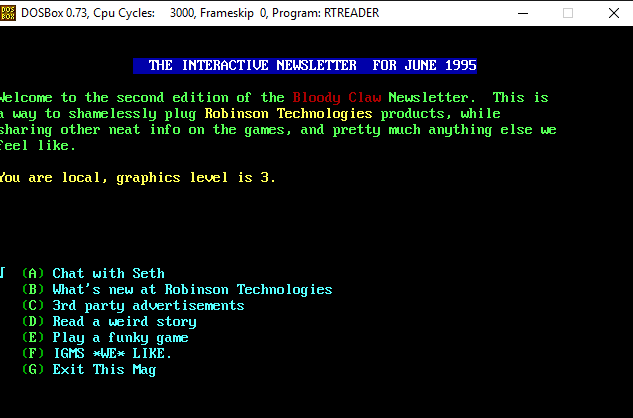 It’s just as hilarious and bad as I expected, complete with tons of misspellings and random things such as a virtual interview and a “game” that ends with a madlibs style story.   It calls itself “Bloody Claw Newsletter Issue 2 from June, 1995”.  So there must be an “issue 1” out there somewhere?  Did an issue 3 ever make it out the door? Hrm.