There are times when you just have to bite the bullet and do some real coding with Xcode.  Here are some tips to make it ‘feel’ more like MSVC (with Visual Assist installed of course) so you can bounce back and forth without snapping and murdering your family again.

Step 1: Get rid of that horrible funky mouse acceleration and fix cut and paste

Setup Synergy+ so you can use your Windows mouse and keyboard on your Mac.  It’s free.

Just think of your Mac screen like an extra monitor.

Note sure if you’ve heard but the Ctrl-X/Ctrl-C/Ctrl-V shortcuts are freakin’ backwards on the mac.  (Don’t get mad Mac people, I just mean from a long-time Windows user’s point of view!)

To fix this, open the Synergy settings on the server side, which would be Windows, and set up the Mac target to reverse the Ctrl/Alt buttons.  (See pic above)

This makes the fix system wide, much better than just trying to fix Xcode specifically to do it.

There are free methods to get rid of that nasty acceleration, none of them really work, maybe the $$ ones do.  Some 3rd party mouse drivers will do the job, but you have to OWN that mouse for it to work right.

You can also reverse the Ctrl/Alt (Sorry, Command key, whatever) under keyboard preferences on  the Mac side, but I seem to remember having a problem with doing it that way.

Next, start Xcode and click Xcode->Preferences, select Key Bindings, then choose “MSVC” as your key binding set.  Now Ctrt-Shift-F does project wide find, Ctrl-Shift-H does project wide replace, F5 does build and debug, Ctrl-` (tilde) will swap between source/header and so forth.

It also remaps debugging keys, F10 will step over, F11 will step into, etc.

It’s not perfect though, it doesn’t seem to want to map a key twice, I can’t get F5 to also “Continue” while debugging.  So that became F6.. consider this a good place to start from that you can further customize.

Step 3: Fix Firefox so Home/End works like you would expect.

You’ve gotta websurf from your Mac once in a while, so install Firefox so you don’t have to deal with Safari.

Install Keyfixer, a Firefox 3 plugin so pressing End or Home while editing text will actually do what you expected it to.

While you’re at it, you can fix it so your mouse’s forward and back buttons work properly in Firefox by using the hotkey mapper in Synergy on the server side: 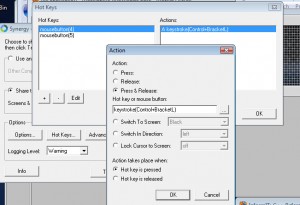 Step 4: Finding a decent SVN client for your Mac

Well, you can’t.  The gold standard is of course TortoiseSVN on Windows – but I can’t find anything close on the Mac yet, at least not for free.  Yeah, I’m cheap like that.

SCPlugin shows a bit of promise because it attempts Finder integration but is currently broken enough to steer clear of.  Maybe later…

RapidSVN is reliable but makes you jump through some hoops if you want merging/diffing.

What works for me currently:

Step 5: Relax and enjoy your MSVC like coding environment

If you’ve got any more tips to ease the Win->Mac pain please share ’em.