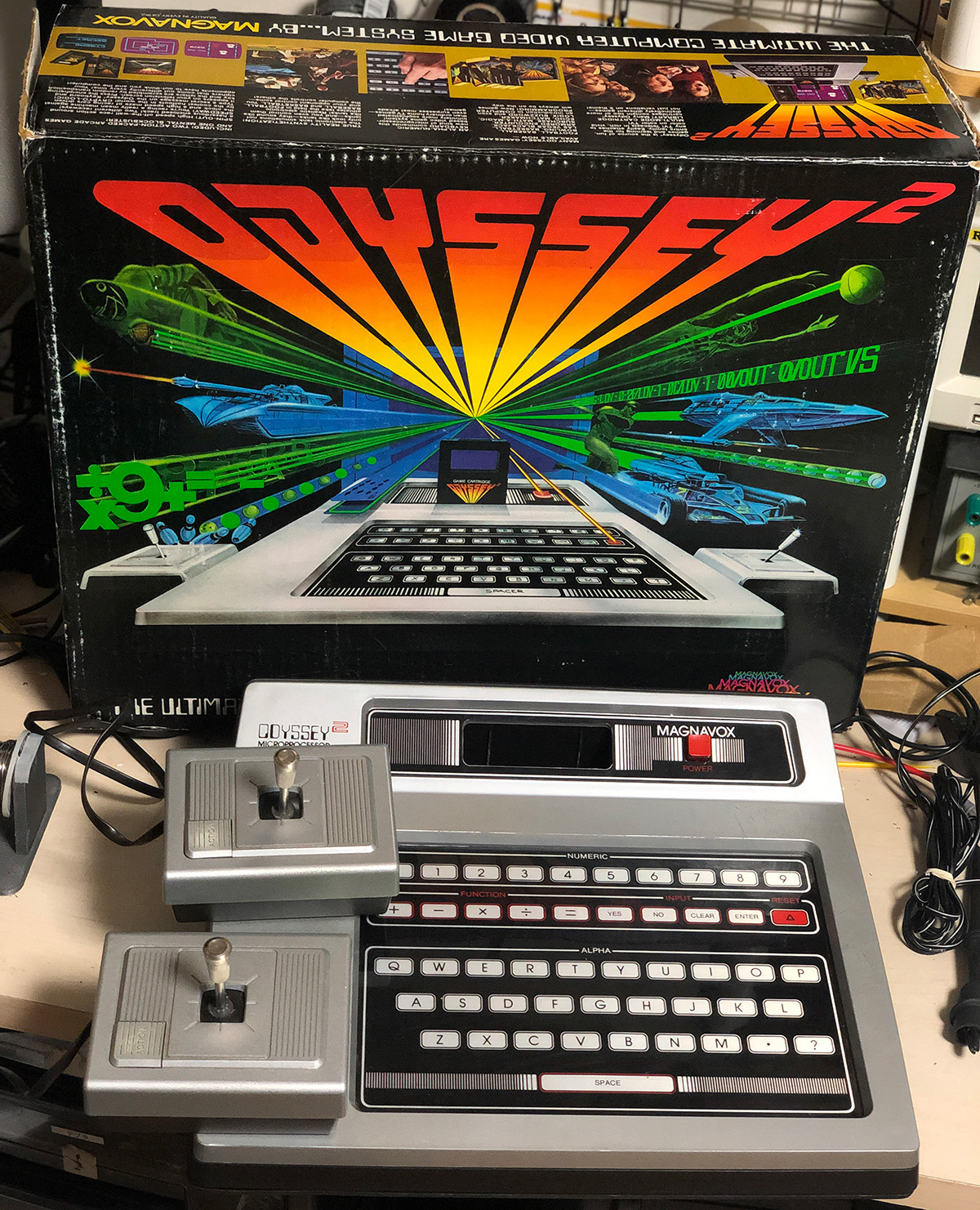 It’s an old ass game console from 1978 I recently picked up from Ebay. It even has a built in keyboard for some reason.

In the first real “console war” it placed third out of well, three, ending up behind the Atari VCS and Intellivision despite some neat addons like a voice module.

It’s famous for hosting the game K.C Munchkin, a pacman-like game that was forced off the market for being a clone in a giant lawsuit.  However, looking back at it, it played different enough that this really shouldn’t have happened. Sorry K.C, you deserved better.

I buy old systems like this and try to fix them up because it’s a cheap and fun way to learn electronics and gaming history.  Oh, and you get to play your homework! 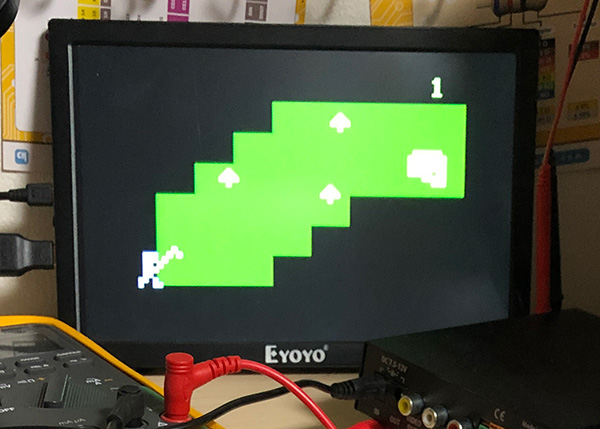 Care for a game of golf? It’s actually not bad. Your golfer gets mad when he hits trees.

For this one I did a composite video mod as that’s a huge improvement over the original noisy RF that requires a US TV tuned to channel 3 or 4.

The joysticks it came with were completely broken – unfortunately finding replacement controllers for old systems is quite difficult and fixing them to work like new almost always requires new membranes or other parts that are not made anymore.

The solution? Wire it up to accept a standard Atari 2600 controller!  It’s kind of a ubiquitious standard that’s compatible with the Commodore 64 and believe it or not, Genesis/MegaDrive controllers.  I got the idea from ArcadeUSA’s youtube video but I did it a slightly different way so I could also use the original controllers as well.

The electronics for the Atari 2600 controllers are the same but the pinouts are different so you can’t plug them directly in. I used what I had on hand,  a “6inch DB9 Female Port to Dual DB9 RS232 Male Serial Y Splitter Ribbon Flat Cable” for the adapter.  $4 from ebay, I cut off the parts I needed with scissors. 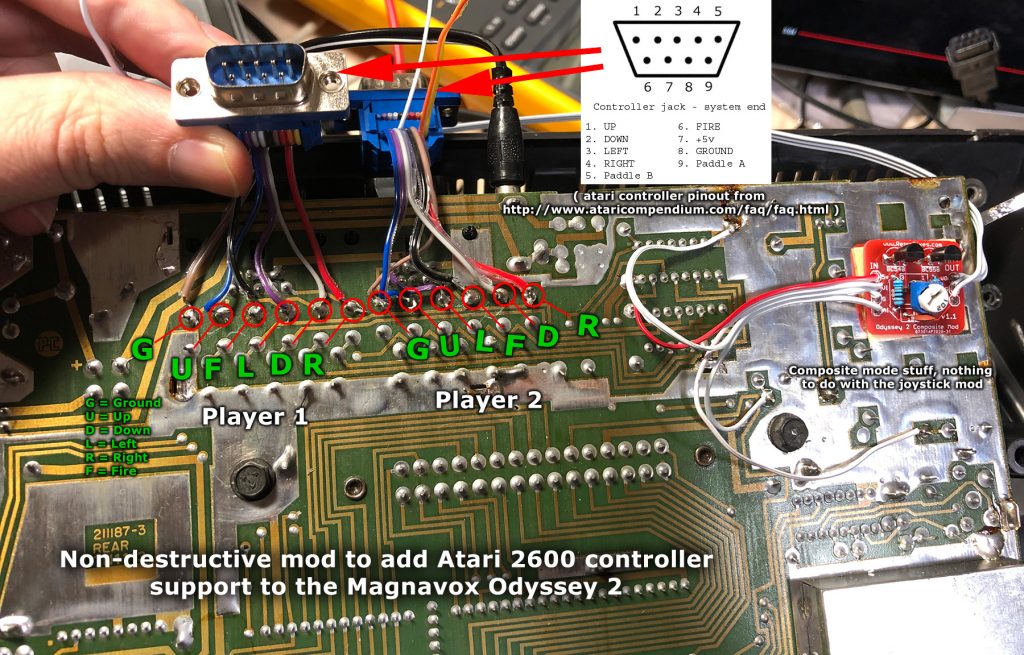 I soldered at the pins below the DB9 jacks, easier there.  Above is a labeled picture that might save somebody time.  Notice that the player 2 wiring is SLIGHTLY different from the player 1. 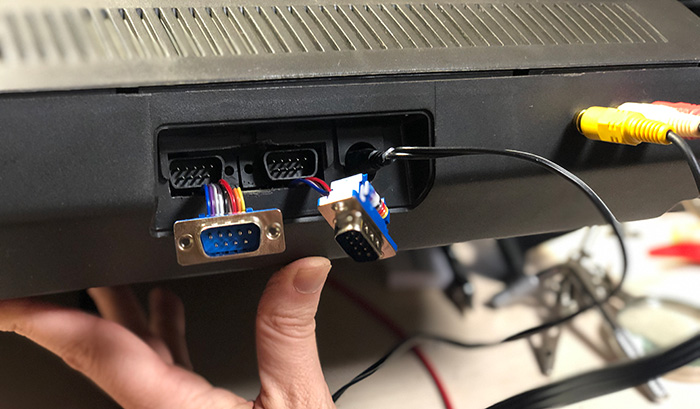 It’s ugly the way they stick out and will surely break soon. But it works great!

It would probably be better to just make DB9 to DB9 adapters to fix the pin differences (could unplug them when not needed), but I didn’t have the right stuff handy.  Someone should make a simple circuit board to do both ports together, something that looks like this useful  joystick port toggle I got for my C128.

Thanks Seth, something I didn’t care about.  When will you actually make a game

Yeah, yeah.  We’ve been working on stuff behind the scenes and will soon be upgrading RTsoft to a new HQ in Kyoto.  The idea is to be a real (well, slightly more legit than now anyway) game studio as well as a sometimes kind of public hackerspace/cafe, more later.