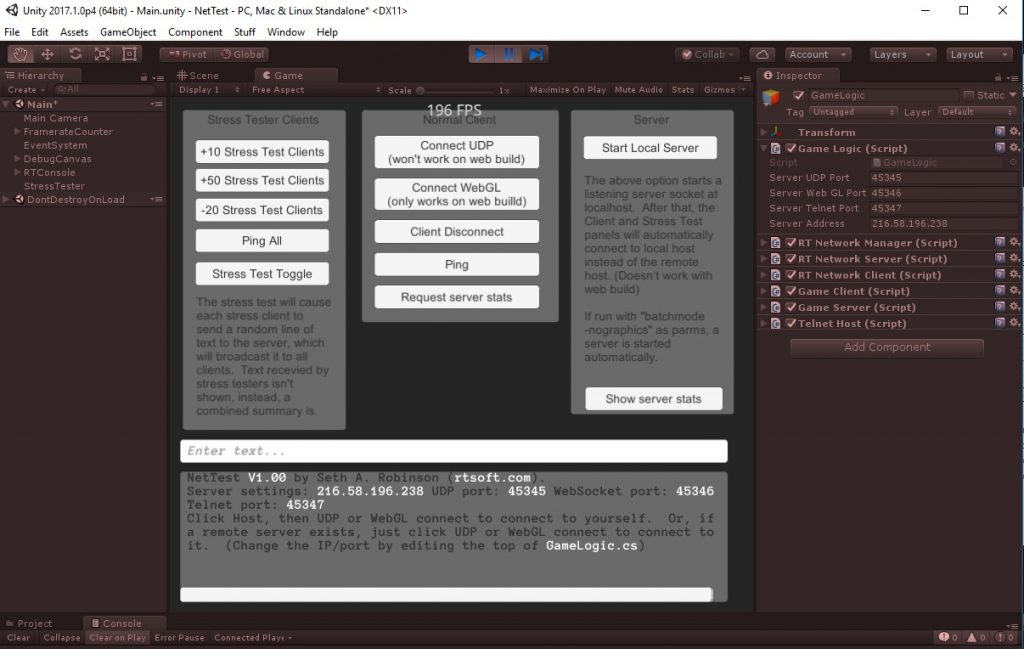 NetTest – a tool for stress testing the LLAPI, full Unity project download at the bottom!

Luckily their replacement netcode isn’t ready yet so now you don’t know what to do except maybe try third party libraries or use simple TCP sockets.  Thanks, Unity

Seth, what the hell do you know about netcode, anyway?!

Woah, with the attitude already.  Look, I’m all about multiplayer.  Have been for a long time.  I’ve gone from being excited to get two people walking on the same ANSI map in LORD2 in the early 90s to hitting the 70,000 concurrent user mark during busy times in Growtopia.

In addition to writing my own junk, I regularly play with Unity and Unreal and am constantly trying to see how they can fit my developing style – mostly I need them because it’s becoming a losing battle to try to maintain your own 3D engine if you also want to actually design and release games too.

LLAPI stands for Low Level Application Programming Interface.  It’s what Unity’s HLAPI (High level) API is built on.  I guess both of those can be called part of UNet. (Unity networking)

Why not just use the HLAPI like a normal person?

That might be ok for some projects, especially round-based networked games without too many players.

When you are targeting MMO level network performance where a server may have to track stats of millions of players and simulate a world for weeks instead of minutes, the first rule is:

Stay as low level as you reasonably can.

I don’t want someone else’s net code to even think about touching my gameobjects, I just want it to deliver reliable/unreliable packets that I write/read straight bytes to.  That’s it.  I want to handle things like prediction, dead reckoning, and variable serialization, myself!

What’s the deal with UDP, TCP, and WebSockets?

Both UDP and TCP are internet protocols built on top of IP.

TCP is a bidirectional socket based connection that insures your data is correct and sent in the right order.

It’s like calling Jeff, he picks up the phone and you can both talk until one of you puts the phone down.  Oh, and after you say something, you make sure Jeff understood you correctly each time, so that eats up a bit of time.

UDP is is a stateless connection where single packets get sent.  You write your message on a rock and throw it at Jeff’s window.  While it gets there fast, it’s possible you’ll miss and Jeff will never see it. If dozens of people are throwing rocks, he needs to examine each one carefully to figure out which pile to put it with so the text is attributed to the right thrower.  He might read the second rock you threw before the first one.

WebSockets are basically TCP with a special handshake that’s done over HTTP first.  To continue this already questionable analogy, it’s as if you had to call Jeff’s mom for permission, and then she gave you his cell number to call.

In theory WebSocket performance could be similar to TCP but in practice they are much slower and unreliable, I don’t really know why but hey, that’s what we get.  I suspect this will improve later.

For games, UDP is nice because you can send some of your packets fast with no verification that they were received, and others (more important packets, like dying) with verification which sort of makes those packets work like TCP.

That said, most games probably would be ok with a straight TCP  steam as well and having a connected state can make things easier, like easily applying SSL to everything and not worrying about unordered packets.

Why use WebSockets instead of UDP or TCP? Just use UDP or TCP for everything, moran

BECAUSE I CAN’T!  Browsers won’t allow the Unity plugin to run anymore, they just allow straight javascript/WebGL these days.  It hurts.  I mean, I wrote a cool multiplayer space taxi test for Unity using TCP sockets and now nobody can even play it.

It can read from both sockets (UDP) and WebSockets at the same time and route them so your game can let them play together.  But how fast is it, and does it work?

This brings us to the second rule of netcode:

Which finally brings us to the point of this post.  NetTest is a little utility I wrote that can:

These tests are presented ‘as is’, do your own tests using my Unity project if you really want exact info and to check the settings.

My windows machine is a i7-5960X, the remote linux box is similar and hosted on a different continent, I get a 200 ping to it.

All packets in NetTest are being sent over the ‘reliable’ channel.  No tests involve p2p networking, only client<>server.

Ok, here I’m curious how many bytes LLAPI is going to use with clients doing nothing.

Server is set to localhost.  I’ve got 4 NetTest’s running – the one on the bottom right has had “Start local host” clicked, and the three others each have added 100 stress clients. 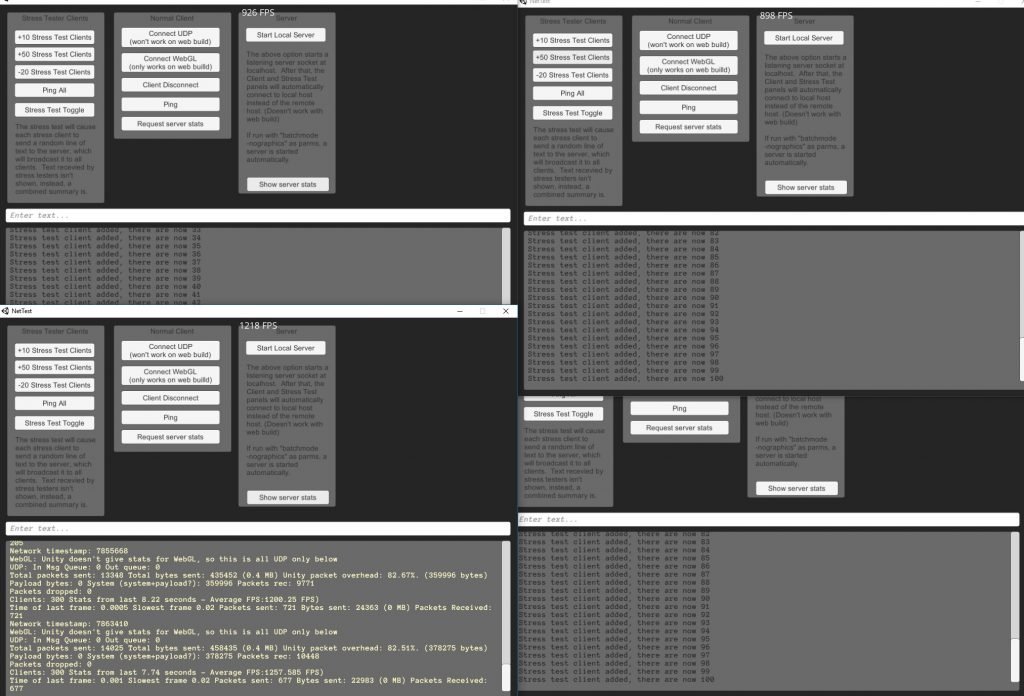 I’m not going to worry about the socket slowness, this may be related to a windows 10 resource thing.  I’ll launch with less clients in future tests to help though.  The server itself has zero speed/blocking issues with actually connecting/disconnecting though, so that’s good.

Ok, now we’re getting serious.  I have 5 instances – 4 have 50 stress clients, 1 is the server.  (I could have run the server on one of the stress client instances, but meh) 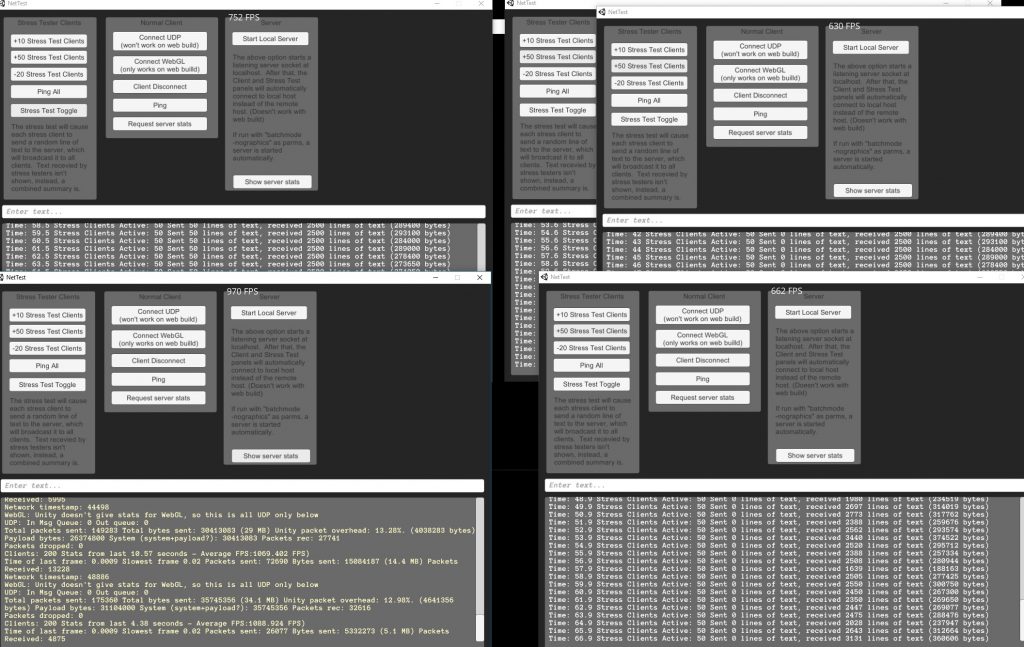 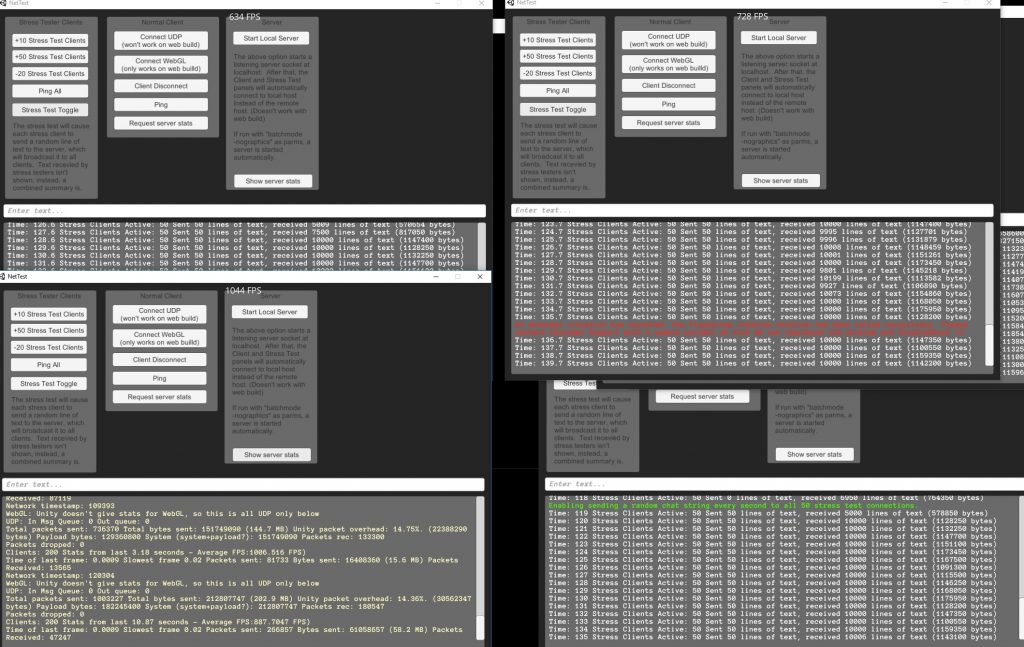 That seemed fine so I upped it to all 200 clients doing the stress test – this should cause the server to send 40,000 packets a second (and receive 200 from the clients).

Is unity combining packets even though I set config.MaxCombinedReliableMessageCount = 1; ?  Oops, I bet that needs to be 0 to do no combining.

I also notice 4,346 per second packets being received by the server.  200 for my messages, and I assume the rest are part of the “reliable guarantee” protocol they are doing for UDP where the clients need to confirm they received things ok.  Oh, and UNet’s keep alives too.

In the screenshot you can see an error appearing of “An abnormal situation has occurred: the PlayerLoop internal function has been called recursively… contact customer support”.  Uhh… I don’t know what that’s about.  Did I screw up something with threads?  It didn’t happen on the server, but one of the four client instances.

I let it run at this rate for a while – a few clients were dropped by the server for no reason I could see.   Not entirely stable at these numbers I guess, but possible it would be if I ran it on multiple computers, it’s a lot of data and ports.

As nice as it is to be able to turn on both the server (localhost) and the client directly from the same app in the Unity editor to test stuff, eventually you’ll probably want to get serious and host the server on linux in a data center somewhere.  This test let’s us do that.

I’ve changed the destination address to the remote IP. (You can click the GameLogic object to edit them, I was too lazy to make a real GUI way)) 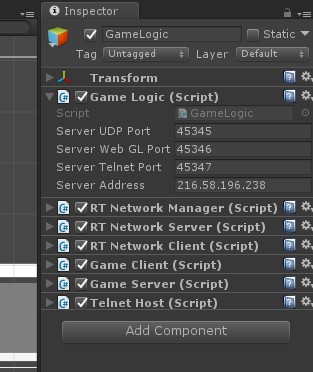 I have a .bat file that builds the Unity project (on Windows) and copies it to the remote server, then triggers a restart.  It’s run on Linux like this:

Here is a screenshot of the 100 clients (using one instance of NetTest) connecting to the linux server (which is also NetTest) (And no, that’s not the real port/ip, stop trying to hack me, Mitnick) 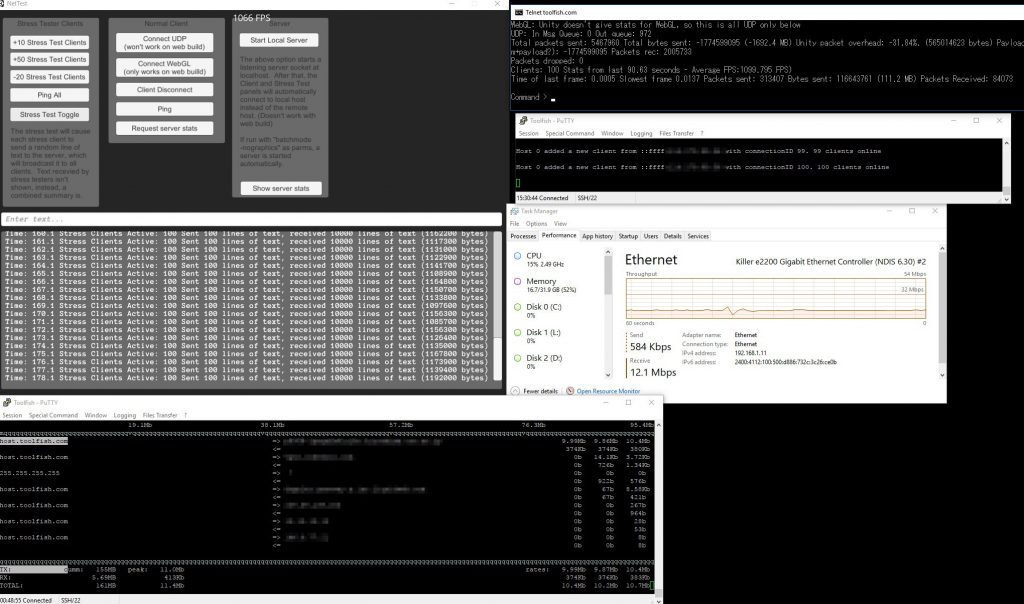 So let’s try to digest this data.

I tried 200X200 (4x the total bandwidth & packets, so 5 MB a second) but the outgoing packet queue started to fill up and I started dropping connections.

I’m not going to bother making pics and somehow this post already got way out of control, but here is what seemed to be the case when I played with this earlier:

All in all, I think directly using LLAPI in Unity 2017.1+ is promising.  Previously, I assumed I’d need to write my own C++ server to get decent socket performance (that’s how I did the Unity multiplayer space taxi demo) but now I don’t think so, if you’re careful about C#’s memory stuff. 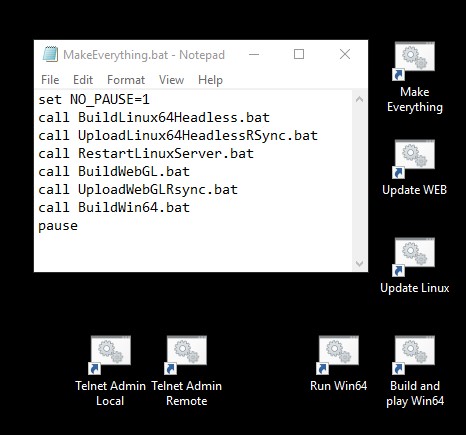 Note:  I left in my .bat files (don’t mock the lowly batch file!), thought they may be useful to somebody.  They allow you to build everything for linux/win/webl, copy to the remote servers and restart the remote server with a single click.  Nothing will work without tweaking (they assume you have ssh, rsync etc working from a dos prompt) but you could probably figure it out.

Source is released under the “do whatever, but be cool and give me an attribution if you use it in something big” license.