I needed a Windows 64 bit development version of the audio library Audiere but couldn’t find any precompiled binaries for x64, so I’m posting them here for any future googlers.

Why did I need Audiere?  Well, I had switched the Growtopia 64 bit client to use SDL2_mixer and immediately had a rash of complaints from poor audio mixing to no audio at all.

Tried various bit rates, buffer sizes, and driver settings (directsound, etc) , still had weird “drunk” timings and distortion when mixing 4+ sounds.  I got it to the point of “not that bad, on my computer at least” but many players still had major problems.  So back to Audiere we go!

Note:  The 64 bit binaries are missing mod/xm support as I didn’t need them for my project and was too lazy to find and include the Dumb source.

If you’d like an easy way to compile your own 32/64 bit version for MSVC2005, I’ve thrown the entire thing including supporting libraries on github so you can build from source in a single MSVC 2005 solution in Audiere/vc8/audiere.sln: 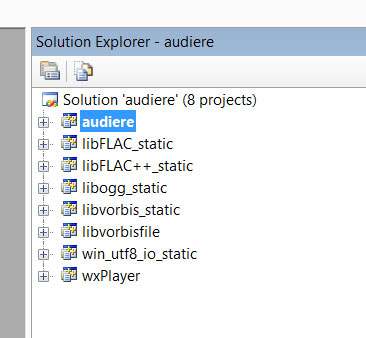