It’s an exciting time in the world of VR because everybody is experimenting with various ideas and control schemes – the “genres” are being invented right in front of us!

Here are some quick thoughts on some games and apps I’ve played.

(most of the pics are taken from the store pages, I only linked the Steam-based games as I don’t think you can directly link to Rift store pages) 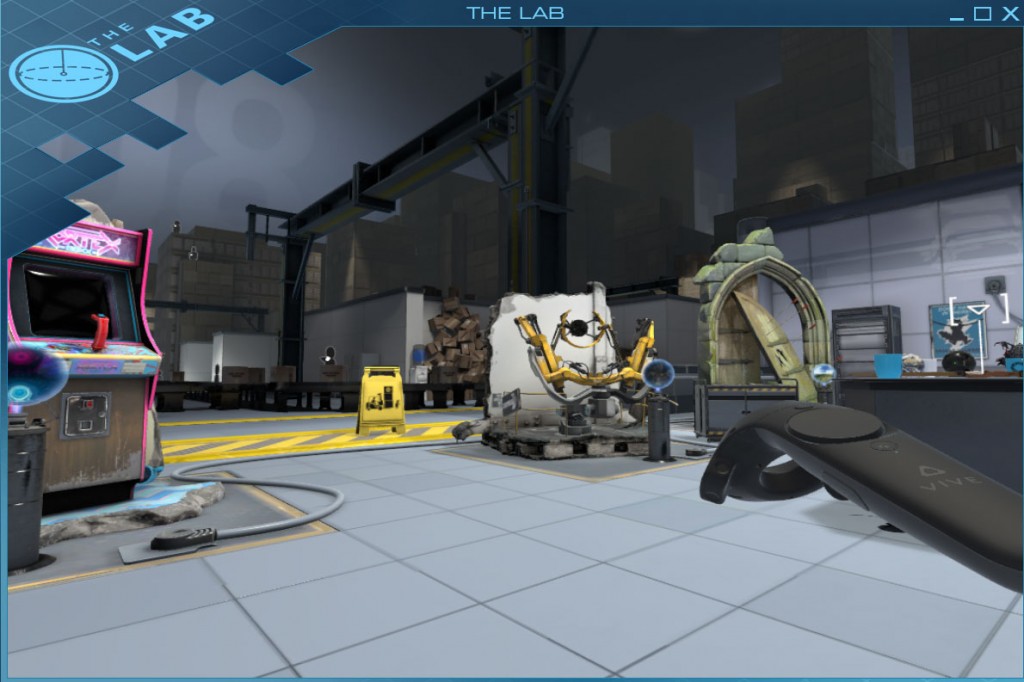 This is Valve’s thing, it’s a bunch of mini-games experimenting with various controls.  This is the first thing you should download and is better than most of the other stuff for sale.  Did I mention it’s free? 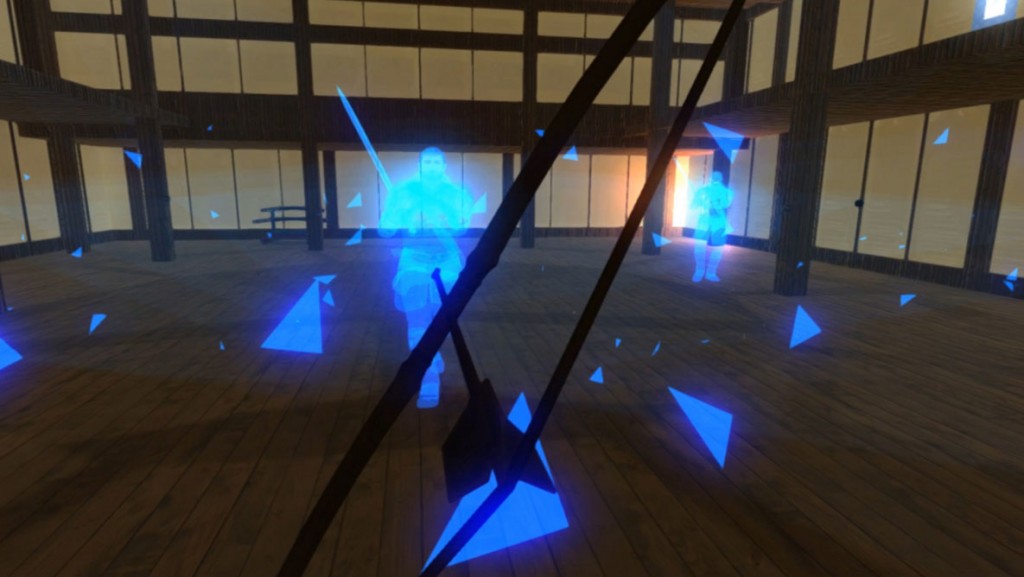 This is my favorite game on VR.  You jump, dodge, and do cool moves as you shoot arrows in all directions.  You kind of enter a zone, like racquetball or tennis, and your body even gets an equivalent work out.

In many arcade type games, if you don’t shoot something in time, it explodes, shooting projectiles at you.  Here, that’s true, but if you DO shoot it in time, it STILL explodes, just with more controlled timing.  That tweak is what really makes this work. 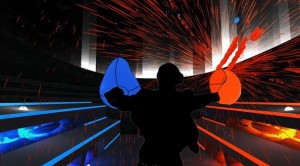 The first VR Rhythm game?  It’s another “must have” and really delivers, but it could be so much better.  Needs the features of a modern Dance Dance Revolution including manual editing of song data (it’s currently all dynamically generated based on song audio as far as I can tell), combo scoring, playlists, pro-made song library, etc.

This Oculus showcase title might be the highest quality thing out there for the Rift right now.  Like Lucky’s Tale, for some reason it seems to be aimed at a very young audience.  The annoying overly cutesy side-kick that won’t leave you alone will have you whispering “kill jester”.

But this game (?) does perfectly emphasize the Rift’s strengths – a 360 degree seated experience that doesn’t make you nauseous and they nailed navigating with your little remote thing.  The scenery is gorgeous.

There is a “you have to wait until tomorrow to see more” time-based content gate on this.  Huh. 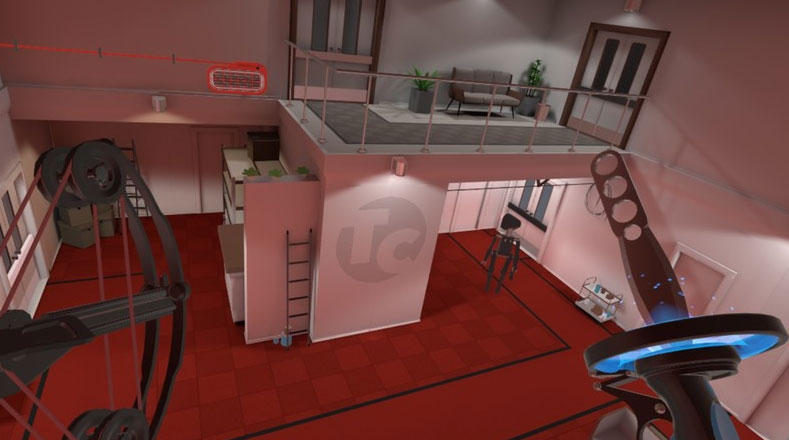 If you want to bang your head on the floor trying to look through a hole and have a heart attack as you throw a knife at a robot while screaming for your life, this is the game!

It’s just a demo but it has nicely found a way to merge room VR with larger spaces using a portal like “see before you hop through” mechanic.  It’s a must get, and will be an insta-buy for me when the full version is released. (Steam page says it’s coming later this year)

Ok, screenshots are too much work, so now we’re on to mini-reviews that don’t even have pics.

Nope nope nope.  Jetting around at multiple speeds while rotating in every direction is exactly what you never want to do with VR.  About five minutes in I was ready to hurl.  To be fair, it and most of the other Rift retch-inducing games available are labeled “Comfort: Intense” so I should have known better. I guess some people can handle this type of thing? If you want to star in the movie Gravity as well as enjoy technicolor yawning, this might be for you.

Job Simulator (Vive): Solid but .. it does sometimes feel like a job to play. I guess what I mean is if you get 90% through one of the four job’s “story” and you crash, you probably won’t want to replay it again to see the last 10%. I guess it’s good, just sort of slow paced and linear while simultaneously letting you play with a bunch of virtual toys.

Fantastic Contraption (Vive):  I love the concept and they really nailed the interface but why does part of my car fall apart but the identical thing I did on the other side doesn’t?! What am I doing wrong? My kingdom for a stiff joint!  Only three contraption parts? You probably shouldn’t listen to anything I say here until I can at least pass level 4.

Hover Junkers (Vive): Multiplayer only, my record is 20 deaths, 0 kills. That says everything about my experience with this game.  Probably good once you figure out how to kill anything. Did I even hit that guy?  How much damage did I do?

HordeZ (Vive): Will slowly auto-floating forward down halls as you shoot horrifying realistic zombies work ok with room VR?  Answer, yes.  It’s multiplayer too but I haven’t tried that.

Zombie Training Simulator (Vive): Cartoony zombie shooting gallery. Good if the above game is too much for you I guess.

Space Pirate Trainer (Vive): Not bad, but it just made me want to play Holopoint, similar idea. Still in early access, looking forward to seeing how this shapes up.

Vanishing Realms (Vive): Interesting and probably what most people imagine a “VR fantasy experience” is going to be like.

Universe Sandbox 2 (Vive): OoOoo… I’m so glad this exists.  It’s early access and has some performance issues but spawning planets is surely something you want to do.

Tilt Brush (Vive): Google’s 3D painting app is one of the top experiences on the Vive. Explore other people’s work (wish there was more..) or make your own.  I don’t understand why all the paints are so flat. I want to paint some pipes, for instance.  Wish it came with some in-app music options, I could totally see zenning out in here. (Side note, I just noticed SculptiVR, that looks like another good one to get)

Dreadhalls (Gear VR, Rift): I’ve only played the Gear VR version so far (we’re getting into a weird place with having to re-buy the same game for various VR platforms…) but yeah, it’s very scary so it’s probably good on the Rift too.

I’ve only brushed the surface, new VR apps are being released daily.

If you’ve got a favorite, let me know. I’m especially looking for room scale games that will get my heart rate going.