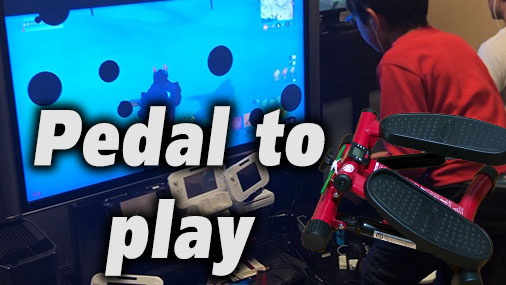 Sure, there are ways to get exercise while gaming. Virtual reality and music games like Dance Dance Revolution come to mind.

But that’s all worthless when your kid just wants to play Fortnite.

Edit:  Also check out the PlayStep Mini, a $10 version!

This thing forces him to work up a sweat. This post details what methods I used and issues I had making it.  (Github source code for the program that runs on the Pi here for anybody who wants to make one)

Building a screen blanker connected to exercise isn’t a new idea (see the end of this post for related links I found) but my version does have some novel features:

I first built a cheap version (~$120 in parts).  It just blanks the screen when you’re out of energy, and uses an LCD screen to show energy left. 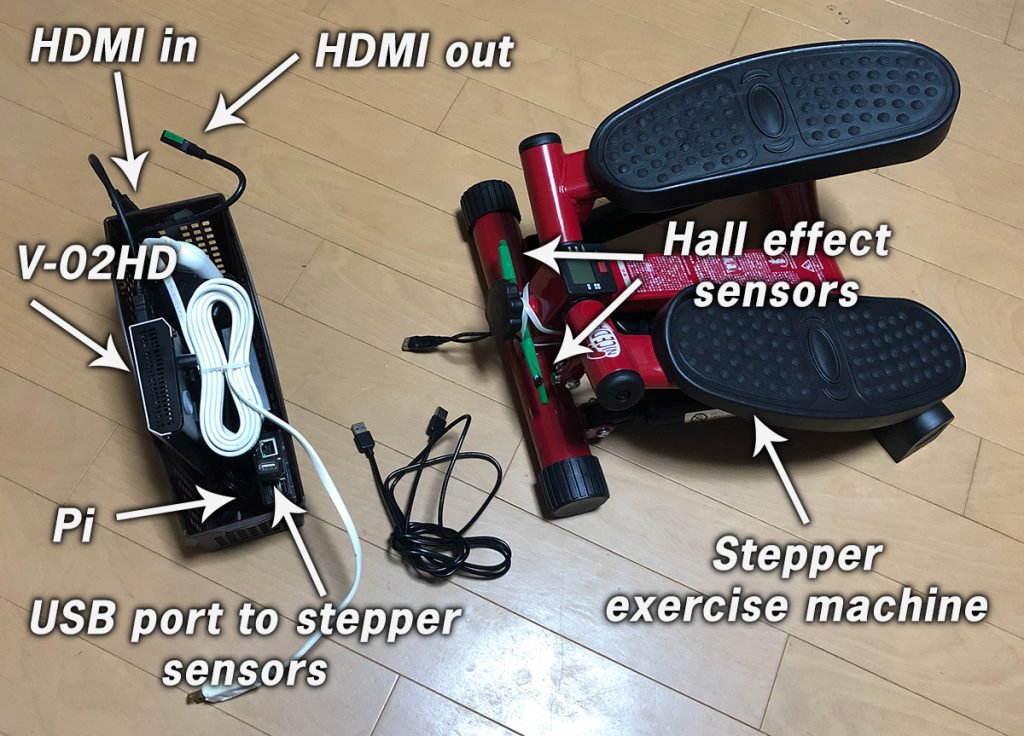 The expensive version with HDMI in/out, the “enclosure” is a plastic basket thing from the dollar store

Things both ways have in common: 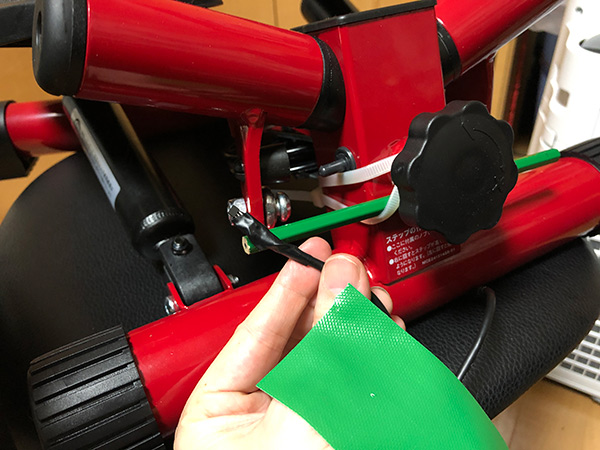 Yes, I’m about to duct tape an electrical taped sensor to a pencil that has been zip-tied in place. What? I never said I was pro

A note on using USB cables for wires and my idiocy

Each hall effect sensor requires three wires.  We have two sensors.  So we need to run six wires from the Pi GPIO pins?  WRONG! We only need four because the power and ground can be shared between them.

Update: This was dumb, I later just used the built in hall effect sensor these steppers already have.  You just need one, it doesn’t force the same range but it’s good enough.

So I thought hey, I’ll use USB cables and connectors laying around as they have four wires in them. (until we get to USB 3+ cables, but ignore that)

Then I thought, if I could find a simple USB Y splitter, it will be easier to share the power/ground with the two sensors . (I’m not actually using this as a USB connection, it’s just so I can use the wire and handy plugs)

Wow, I found this for cheap on Amazon: 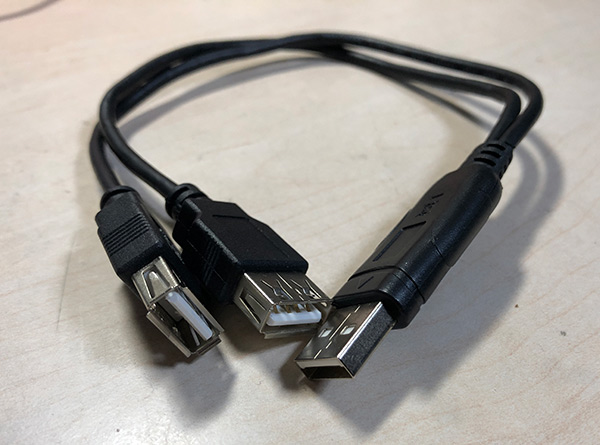 Perfect!  A lowly USB splitter that I’m sure just has no fancy electronics hidden inside

So I partially wired it up but when testing found that the middle pins had no continuity.  Can you guess why? 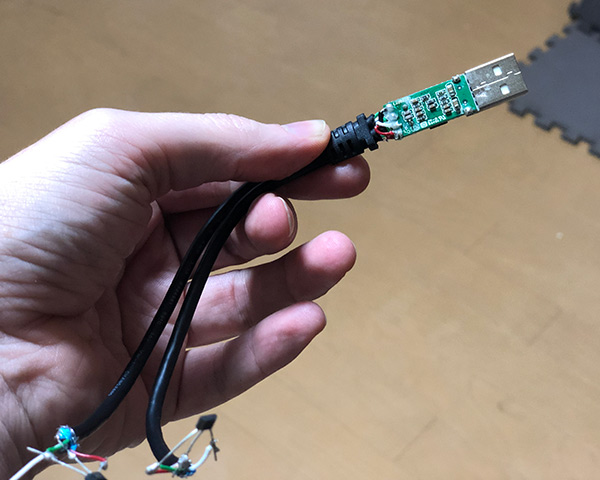 WHAT THE HELL IS THIS INSIDE THE CABLE?!

It’s got a hub or something hidden in the connector.  I never plugged it into an actual PC or I might have noticed.  No wonder it didn’t work.  I removed the electronics part (it was a horror, I shouldn’t be allowed near soldering irons) and it worked as expected. Moral of the story is, I’m dumb, and don’t trust USB splitters to just split the wires.

My “cheap” way ignores rendering anything graphical (It doesn’t output any HDMI itself) and just shows a single “energy count” number on an LCD screen.  When it gets low, the game’s HDMI signal will be completely shut off until it goes positive again.  In the video above I’m using little buttons to test with instead of the stepper.

Edit: Check out this all-in-one more svelte version I did more recently

To help the user notice the screen is about to shut off it makes a beeping noise as the counter nears zero.

I suggest never testing this at an airport, can’t stress that enough really.

So how can a Raspberry Pi turn on/off the game’s HDMI signal? 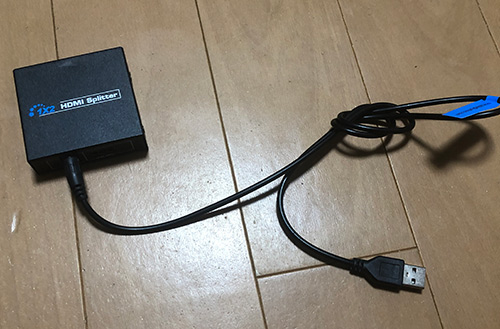 A splitter with no USB power = a dead signal

This is hacky but it works – I took an old 1X2 HDMI splitter and powered it from one of the Pi’s USB ports.  (lots of electronics these days use a USB plug for power)

I only use one of the outputs on the splitter as I don’t really need any splitting done.

So when the player is out of “energy”, I kill the USB port powering the HDMI splitter by having my C++ code run a system command of:

And because the HDMI splitter is now unpowered, the signal dies killing the game screen.

After turning the USB port back on (replacing “off” with “on”) it will power up and start processing the HDMI signal again.  Originally I was using the Pi to turn on/off an entire AC outlet but that seemed like overkill – I was thinking maybe turning off an entire TV or something, but meh.

So the big downsize of this method is it takes up to 5 seconds for the HDMI splitter to turn back on, and your TV to recognize the signal again.  It works but… not optimal.  Also, in my case I don’t really have a good place to put the LCD screen or speaker for the beeping. (might make more sense on a stationary bike instead of a stepper)

Alternate way to disable the HDMI signal : Instead of this no-wiring hack, maybe instead run it through an HDMI cable but put one of the pins into a relay to turn that pin on/off?  Might be the same effect but cheaper and simpler.. although, which pin?!

There isn’t enough drama in simply turning the HDMI signal on/off – wouldn’t it be better if holes started spawning randomly over your actual gameplay and you had to pedal to remove them as your screen became increasingly obscured?!  There are a million options, really.

The Raspberry Pi can generate the graphics (thanks GLES) and audio but we need a way to overlay its HDMI output over the game’s HDMI signal with no noticeable latency costs at 60fp. 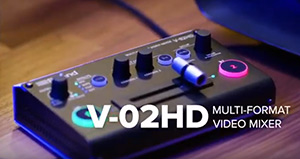 The cheapest stand-alone way I found to do it these days is a Roland V-02HD video switcher. (I bought it for $664 USD from Amazon Japan)

Does anybody know a better/cheaper alternative? If I could figure out a no latency way to overlay with an alpha channel instead of just chroma that would really be ideal.

Edit: The Atem Mini HDMI Live switcher looks like it would work too, it’s a bit cheaper.

Further edit: Check out the $10 version I built, although it lacks the bells and whistles

It’s pricey, but it works perfectly.  It has the following features of interest:

Although I didn’t need or use it, it’s worth noting that it can show up as a USB MIDI device and be controlled via MIDI signals.  I did not need those features but that’s pretty cool, assuming the Pi could work with it, you could do transitions between inputs or enable/disable effects. 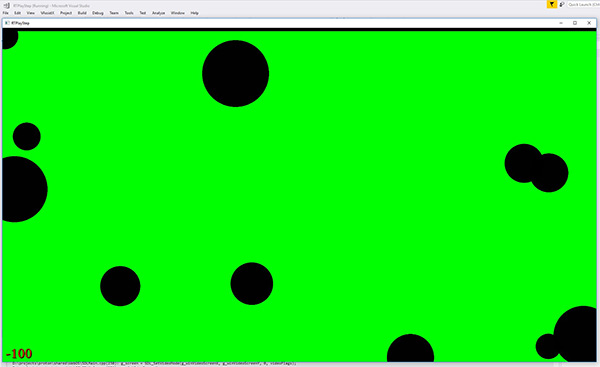 With no color keying, this is what the raw Pi video out looks like

The software to control things uses Proton SDK with its SDL2 backend and WiringPi for the GPIO to read from the sensors.  It’s modified from the RTBareBones example.

It uses a config.txt file to adjust a couple things:

Here’s some info on how to compile Proton examples.

To allow the Pi to correctly output 1080P HDMI even if the switcher hasn’t booted up yet, I edited the /boot/config.txt  and set:

To fix remove the unnecessary border I also set:

Might be fun to simply design Pi powered pedal games that use the stepper as a controller.  You could then output straight to a TV or TFT screen without worrying about the spendy chroma-keying solution.

I mean, sure, my kid would refuse to play it, but it could be a funny thing to show at a meet-up or something.

Related things to check out