If you don’t have a holographic device the screen will look like blurry garbage. If you want a build that works in 2D for some reason, I guess I could do one though…

Supported games (you must supply the rom, they are not included in the zip):

Note: Supported means they are playable, it doesn’t mean they work perfect or don’t have issues…!

Note: There are two versions of Castlevania NES roms out there, if it’s not detected and not playing in 3D you might have the wrong one.

It will run unsupported games, but they won’t have any depth/3d effects.

Arrow keys: Move
Ctrl, Space, Enter: A and B and Start buttons (gamepad supported too)
Return: Reset game
Num 0 through 5: Set frameskip (higher makes the game run faster by not showing every frame)
Num 6 through 8: Toggle texture smoothing, shadows, lighting
P: Pause
A: Adjust audio to match game speed (experimental but can help with audio problems)
–/+: Zoom in/out. Hoping this will help with other Looking Glass sizes.
S: Save state
L: Load state
< and > : Cycle through detected games (any roms you’ve placed in the atari2600 and nes directories)

I can get 60 fps with everything with a 5ghz with Nvidia 3090. Exception is Virtual Boy which I’ve limited to 50fps to match the real device.

If a game is too slow, press 1 or 2 for frame skipping modes. If audio is weird, press A to cause audio to sync with the recent framerate. (gets rid of pops and scratches usually, but pitch/speed will be wrong making it… interesting…)

If you have problems, check the log.txt file for clues. (created in the root dir where HoloVCS.exe is)

Q. Does it support other games besides these?

A. It will play unsupported games without 3d plane effects, so not really

Q. I noticed you’re using emulators via a libretro dll interface, does this mean I can pop in more emulator types?

A. Yes! Well, no. I mean, each requires customizations to work properly and do 3d stuff.

Q. The snake in Pitfall! is mostly invisible!

Q. Why do some levels look weird or broken?

A. Sorry, I only made it so the first levels works, didn’t worry about later stuff. It is possible to detect current level/environments via PPU memory and adjust rendering to match the situation though.

Q. Why is it called HoloVCS?

A. It originally only supported Atari VCS emulation. Too lazy to change it

1.1 Added support for a few NES games too

1.2 Added some Virtual Boy support. The neat thing about this is there nearly no game specific code happening, it’s reading the 3d position directly by hooking into the emulator at a low level. It’s not able to capture everything but it’s enough to be a neat gimmick. The only game-specific thing I’m doing with VB is setting the zoom level to look slightly better for certain games.

Is it worth the money? How different is it?

So I broke down and got a Vive Pro despite its exorbitant price tag. Is it worth it?  Well… probably not, unless you’ve got money to burn.

I hate the idea of playing something like Skyrim VR with the old Vive when I know I could be seeing something prettier if I had better hardware.  It’s like that feeling of sadness I had playing Quest For Glory 2 before I had a sound card; I knew I was missing out on some of the experience.

It’s got some nifty tech inside that may be useful later though – dual cameras for AR stuff and Hololens-like collider detection as well as eventual 10×10 meter room support when the new base stations are released. (a 10×10 VR play space in Japan? let me pause to laugh uncontrollably followed by a single tear down the cheek)

In a year they’ll probably have one neat package with all the new stuff, so better for most to wait for that.

I can’t quite put my finger on it, but I felt like the optics were slightly blurrier on the peripheral areas as compared to the original.  Might be my imagination or something specific to my eyes, dunno.  I took some pics through the lenses with both devices with this setup to compare: 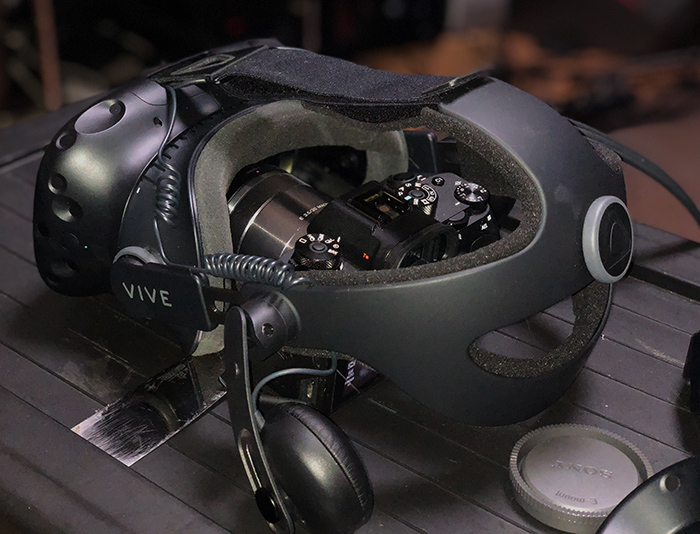 It’s all quite scientific, let me assure you. Yeah.

I couldn’t really notice a different in the edge lens distortion from the pics.  Here’s a comparison of the square from the middle, you can see there really is less screen-door effect now though. 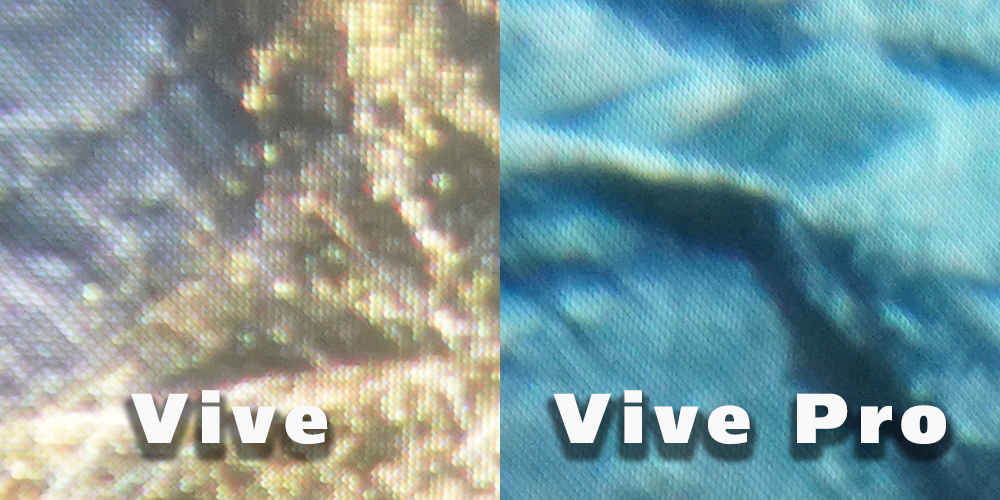 Pics are from Skyrim VR

My NVidia 1080ti seems to run content at the same FPS as the old Vive, so so no real downside to the switch I guess.  It seems about equally as comfortable as the original Vive, that is to say, extremely uncomfortable.

4/24 2018 Update: HTC has announced an “aimed at the enterprise” $1399 Vive Pro full kit that includes the new 2.0 base stations and controllers, which in theory will offer better tracking and huge spaces.  A word of warning – unless they just started shipping with a new cable, the Vive Pro cable is the same length as the Vive, meaning larger spaces wouldn’t do you much good until the wireless addon is released later this year. (?)