Includes many new features and bugfixes, but probably the most exciting thing is that the Blackberry Playbook was officially added as a target – p+ now compiles to six platforms!

Sold a couple “no attribution required” licenses to Proton.. yay. Unfortunately I can’t tell you for which games due to the agreement…

… but one of them has hit one million downloads on Android!

Here are some shots of the new maps coming in the next version: 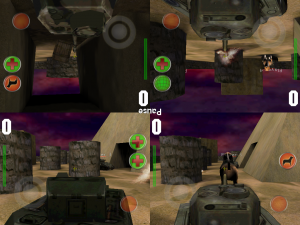 On a side note, I almost made a horrible mistake with this level – if you pushed in the right place, you could climb the pyramid.

In a single player game this would be a funny easter egg – in a multiplayer battle this could have been used for griefing due to no vertical aiming, you’d have to follow the player up to kill him and games based on kills could take forever.  I hope I fixed it! 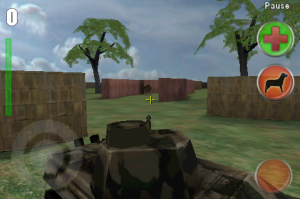 The next version allows private games by a “room name”.  Eight friends in a single room or spread out across the globe with different device types – either way you get instant, easy multi-player action.

Or don’t tick that box and the automatic match making will find a game for you.  The “prefer smaller levels” option is for people who have bad connections or just like more intimate battles. 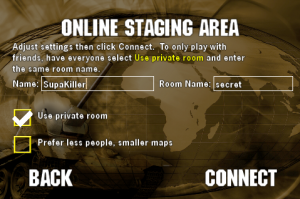 It’s my new game.  It’s been sort of stealth-released for nearly a month.

The idea was simple:  In just a couple of button presses, you should be able to jump into satisfying online eight-person 3D Quake-ish style combat (with world rankings and text chat) while waiting for a bus on any iOS/Android/webOS device.

If you haven’t played it, you can get an idea from this user-made video.  (hey, is that guy flipping us off?!  Also, you only need to hold down the white circle to move, don’t know why his finger is dragging it way up there.. hrm)

Usually I write a game, make a youtube video, send press releases and promo codes around the interwebs and cross my fingers.  But with this game I’ve taken a more relaxed and organic approach.

Watching the server like a loving father has given me some big time Bulletin Board Era nostalgia.

It warms the cockles when I see a player answering an earnest noob’s desperate cry of “how do I move?” with a tender hand instead of the standard “sux 2 be u” reply.

And, well, to be honest, it’s Deeply Satisfying™ to ban trouble makers or rename offensive user names to “Sparkles” or “Fluffy”.

Being a single developer with complete freedom is fun.  Would a normal person do this?

In less than a month the online player rankings have grown to 44,614 and is growing by the thousands every day.

It’s been an interesting (and educational) challenge having three platforms smoothly play together despite annoying week-long app submission processes.

Will I keep working on it and add team play and more items and ways to interact?  That’s the general plan but I also have some other work stuff going on so.. hmm.  We’ll see.

For info on the cross platform framework I wrote that this uses check the Proton SDK wiki.

To download the game, click here.  Or better yet, wait for V1.04 to become available first as it improves things quit a bit.  But then again, I say that about every version… developer thing.

My free cross platform library Proton SDK (a framework that helps you write C++ apps for iOS, Android, WebOS, Win, and OS X) has quietly been receiving improvements across the board:

Some Proton-based games recently released by other companies: 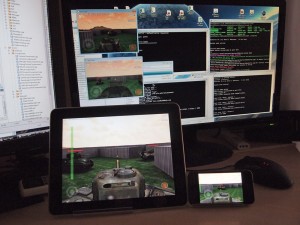 Networking test of my new tank game, here is what that jumbled mess in the picture is:

I’m glad I’m finally getting into the networking side of things, haven’t really done anything real-time like this before and it’s been a blast.  Definitely something I will be focusing on in future titles as well.

RTsoft makes things like funeral parlor simulations,  how can a mundane tank game fit in?

The worrying thing is I really want this game to be unique and interesting and not “another dang tank game”.   This is a game where making a character pregnant or abusive (my usual way?)  just isn’t going to work so I’m going to have to dig deeper and do actual good game design I guess.  Got some ideas…

Using the Fling with Dink

I was sent a couple of Flings – a sort of gamepad for the iPad and by jove, it really works!  With no tweaking at all Dink HD controls absolutely great with it.  Only problem is selecting dialog and items is a bit sketchy, so I will be creating a “Fling-friendly” update soon.  It’s just that good.