Captured this a while back, finally got around to putting this online.  Enjoy the crazy.

You’ve probably heard the legends of a mystical multiplayer Flash game that stunned all who played, a game that dared cover a topic so simultaneously wonderful and terrible that it changed all who touched it.

But alas, it’s been offline for years, a distant memory that the elders would whisper of in hushed voices… UNTIL NOW!

FUNERAL QUEST IS BACK.

Now with a revamped server capable of handling more death care industry hi-jinx than ever before! (as long as Akiko’s computer doesn’t crash..)

I personally invite you to join us on this thirty day journey of pain, tears, and redemption – be a part of the soul-searching pilgrimage that will pit you against your only too alive neighbor in a game of greed, death, and preying on the emotionally vulnerable.

It takes about 10 minutes a day to “play your turns”, it’s free, and I’m even going to send an unimpressive (but suitably disgusting) prize to the winner, which is really something, considering how lazy I normally am. 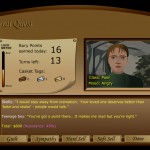 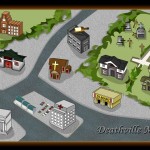 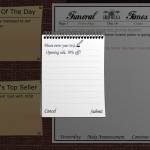 It’s my new game.  It’s been sort of stealth-released for nearly a month.

The idea was simple:  In just a couple of button presses, you should be able to jump into satisfying online eight-person 3D Quake-ish style combat (with world rankings and text chat) while waiting for a bus on any iOS/Android/webOS device.

If you haven’t played it, you can get an idea from this user-made video.  (hey, is that guy flipping us off?!  Also, you only need to hold down the white circle to move, don’t know why his finger is dragging it way up there.. hrm)

Usually I write a game, make a youtube video, send press releases and promo codes around the interwebs and cross my fingers.  But with this game I’ve taken a more relaxed and organic approach.

Watching the server like a loving father has given me some big time Bulletin Board Era nostalgia.

It warms the cockles when I see a player answering an earnest noob’s desperate cry of “how do I move?” with a tender hand instead of the standard “sux 2 be u” reply.

And, well, to be honest, it’s Deeply Satisfying™ to ban trouble makers or rename offensive user names to “Sparkles” or “Fluffy”.

Being a single developer with complete freedom is fun.  Would a normal person do this?

In less than a month the online player rankings have grown to 44,614 and is growing by the thousands every day.

It’s been an interesting (and educational) challenge having three platforms smoothly play together despite annoying week-long app submission processes.

Will I keep working on it and add team play and more items and ways to interact?  That’s the general plan but I also have some other work stuff going on so.. hmm.  We’ll see.

For info on the cross platform framework I wrote that this uses check the Proton SDK wiki.

To download the game, click here.  Or better yet, wait for V1.04 to become available first as it improves things quit a bit.  But then again, I say that about every version… developer thing.

Cosmo and I playing Super Battle… but just what is super battle you ask?

So there you are, destined to walk miles in the hot sun with only your seven year old as a companion. You’d love to play some simple D&D type games with him but getting out dice just isn’t an option.

Possible solution 1: Could use Rock Paper Scissors to decide outcomes. It could work but it makes it difficult to roll a “1 in 15” chance. Besides, you’re holding a two year old and a bag, your arms aren’t free.

Possible solution 2: Could download a dice rolling app on your iPhone. Workable. But the sun makes the screen hard to read and presents problems when the two of you aren’t walking side by side. Also, you don’t have an iPhone.

If only someone would invent a better way…

According to five minutes of Googling, it appears my son and I have actually INVENTED THIS despite being in the age of the internet.  I thought that was supposed to be impossible!?  Or more likely, it was considered too weird and/or stupid for anyone to ever post about it.  Until now!

I suspect the ancients knew of this hallowed technique but it was somehow lost with Atlantis.  Yeah.

Ok, first, the most basic version.  Let’s say you are attacking your opponent with knife, and you’ve decided there is a 1 out of 3 chance you will hit.

In unisen, you both yell: One Two Three <the number between 1 and 3 you’ve select>!

If someone is too slow/fast, it’s a redo.  (Same as Rock Paper Scissors)

If you yelled 1 and he yelled 1, they match and it’s a hit.  So you can deduct the damage from his life or whatever.

At times you just need a standard roll, rather than a hit/miss based on odds. In this case, each person shouts 1-N like before, but the results are added together and “modded” by the number.

Example to get a number between 1 and 6:

This method might work better if you used (desired number*2) for the initial roll, but then it gets to be too much work to get the final number for kids.

Here is an actual rule set for an ultra simple vocal rolling only game for your next hike! (This is the one we’re playing in the video..)

In Super Battle you duel the other player to the death using a combination of weaponry, healing, and even espionage.

Setup: Each player starts with 10 “Life” points.  Their maximum life is 20.

Decide who goes first: Use Rock Paper Scissors to select the first attacker, then alternate turns until a player “dies”.

Each turn a player can choose one of the following strategies to beat his enemy:

Apply damage by removing it from the attacked persons “life” points.

Winning: Game is over when someone’s life reaches zero.  The player remaining standing is the victor.  The loser must then say “He truly is.. the chosen one!” in an old man voice.

Recommended:  Let your kid modify the rules each time you play to keep things interesting.

Well, basically like “6x – The one page role playing system“, but we limit the options to 3x, then we might use some variant of Super Battle to handle fights if we feel like it.

So next time you’re trudging through the forest with a tired kid in tow and lamenting your lack of gaming peripherals… challenge your kid to a Super Battle.

Three times a year hundreds of masochistic geeks from around the planet push themselves to the limit by creating the best game they can (individually) in only two days. The winning theme you must base your game around is announced as it begins.

Check out the keynote (done by Sos this year, nice job!)  and get more info at Ludumdare.

I don’t think I’m going to be able to devote enough time to make anything this year, but at the very least I’ll be hanging out in irc cheering the brave on as usual.

My unhelpful guide for first-timers is here.

Warm up your compilers, gas up your image editor, and change the tires on your music program because it starts in 23 hours.